Two cents on the emergence of Cynefin

This blog was originally posted on the StoryConnect website. To maintain it, I copied it here.

Weather forecasters here in the Netherlands are dispatching warnings of temperatures rising to 50℃ (122℉)  during the Grand Départ of the 2015 Tour de France next Saturday in the middle of Utrecht, just a few miles from my house. Health experts warn that casualties, even mortal, can be expected.

All that is far more important than another debate that seems to be heating according to some involved. That “debate” about the development of the Cynefin Sensemaking model is taking place in three places:

As an accredited Cognitive-Edge practitioner since 2005 and with a PhD in complexity science (based in chemistry) I would love to add my 2 cents to these discussions without entering into these discussion directly.

Not that it would be easy to contribute in some well visited place. Besides my self-chosen censorship on Cynthia’s blog, Cognitive Edge has blocked me from responding in the LinkedIn CE Network group (sic!, complaint filed) and their website (which is strange as I’m still a Cognitive-Edge accredited practioner and to my knowledge there is no formal procedure for de-accreditation ….). Finally I’ve declared a Conflict of Interest regarding the Cynefin page on Wikipedia (which is a good thing, even though I was the one that created it many years ago) even though we hardly use Cynefin in our business anymore.

Luckily Freedom of Speech is still granted to me on our companies website so I choose this place to add my two cents to highlight some information regarding the history of the Cynefin model. Still it is for those reasons that the featured image that heads this post shows Eleanor Roosevelt holding up the Universal Declaration of Human Rights (1949) of which Article 19 states.

Everyone has the right to freedom of opinion and expression; this right includes freedom to hold opinions without interference and to seek, receive and impart information and ideas through any media and regardless of frontiers.” (source of quote and image: Wikipedia).

It seems there are some issues around interference, impart and frontiers and there are clear attempt to violate my rights in some communities, but I’m long over that. Still I think its worthwhile to chip in. So here we go.

The first piece of information I want to share is a chapter from the 1999 book Knowledge Horizons. Parts of the book are also available on Google Books, but as so often, large chunks are left out. I first tried to scan the book itself but the pages are too small and yellowed to obtain a readable result.

I was lucky enough to have archived a set of files and documents from the era 1999 to 2005 (If I remember well I got them from Friso Gosliga) and one of the many documents seems to be a source for the chapter Cynefin: a sense of time and space, the social ecology of knowledge management by David Snowden. The footer of the PDF reads:

Cynefin: a sense of time and place. Originally published as a chapter in Knowledge Horizons: The present and the promise of Knowledge Management. Butterworth 2000.

In it Dave described what the Welsh notion of Cynefin means to him and it contains images. Figure 1 is presented as the Cynefin model. 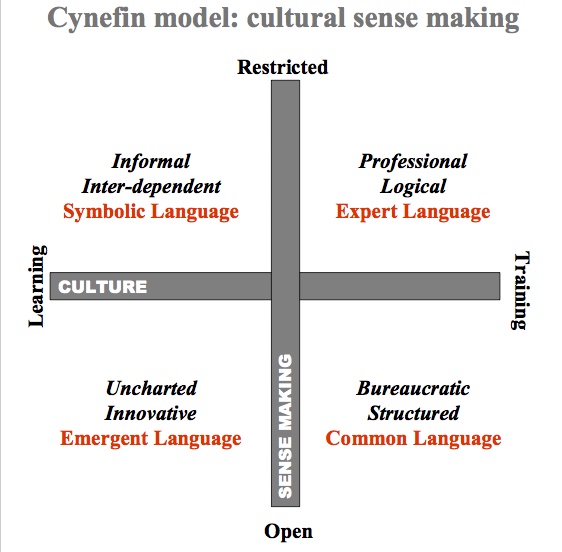 Earliest form of the Cynefin model available to me. From the chapter The present and the promise of Knowledge Management in Knowledge Horizons.

This is the earliest form of the Cynefin model that I possess in both paper and digital form. There is one other document that says it is for the KMAC (2000) and that is basically the same document with the same images. If anyone has the KMAC paper on paper it would be nice to share that somewhere. On request I can share the digital version.

I won’t risk discussing the differences between this version of Cynefin and the 2001 version (published in 2003 in the IBM Systems Journal with Cynthia Kurtz as lead author) in detail, but a few stand out:

So it is clear that a lot has happened between 2000/1999 when the horizons chapter appeared/was written and 2001 when the IBM Systems Journal article was written. I guess it will take a proper historical research project to find out more on what happened in that period, but the notability might be insufficient to justify such an endeavour.

The next publication seems to be Complex Acts of Knowing: Paradox and Descriptive Self Awareness solo by Dave Snowden in Journal of Knowledge Management – Vol. 6, No. 2, (May) pp. 100–111 (2002). In contrast to the Horizons paper this journal today is a peer reviewed journal but I can’t find any information on whether that was already the case in 2002. Anyhow, lets assume it was peer reviewed at the time.

In this paper seems to be the first appearance of what has become known as the neural form of the Cynefin model.

In Figure 2 one finds an almost identical version of the Cynefin model apart from the neural shape/biological shape of the axis and the Y-axis has moved from open/restricted to low abstraction/high abstraction. Emerald provides no details on submission dates so probably this article was drafted in 2001 or even 2000. 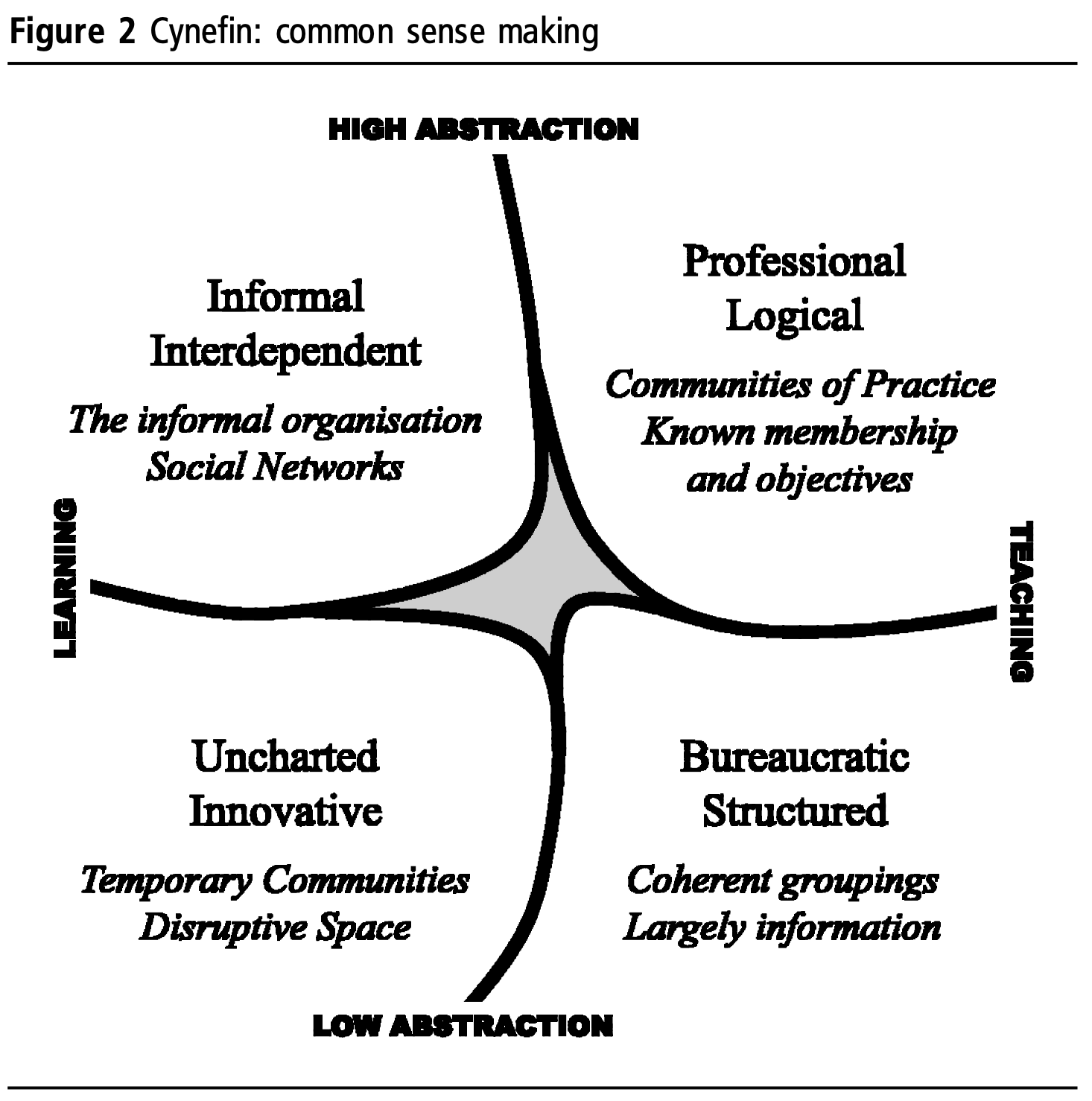 First time Cynefin is shown in its “neural” form.

It might be significant to historians to note that the “central space” that appears here is not described in the article. Just below Figure 2 the article states:

One can read this snippet in various ways. One way is to assume that the author indeed tries to limit the amount of information provided to readers, the other – more common one – is to read it as the author is still struggling with this. I leave it up to readers to decide which perspective they prefer and/or to come up with others.

The article however doesn’t stop there, if also contains a Figure 3: 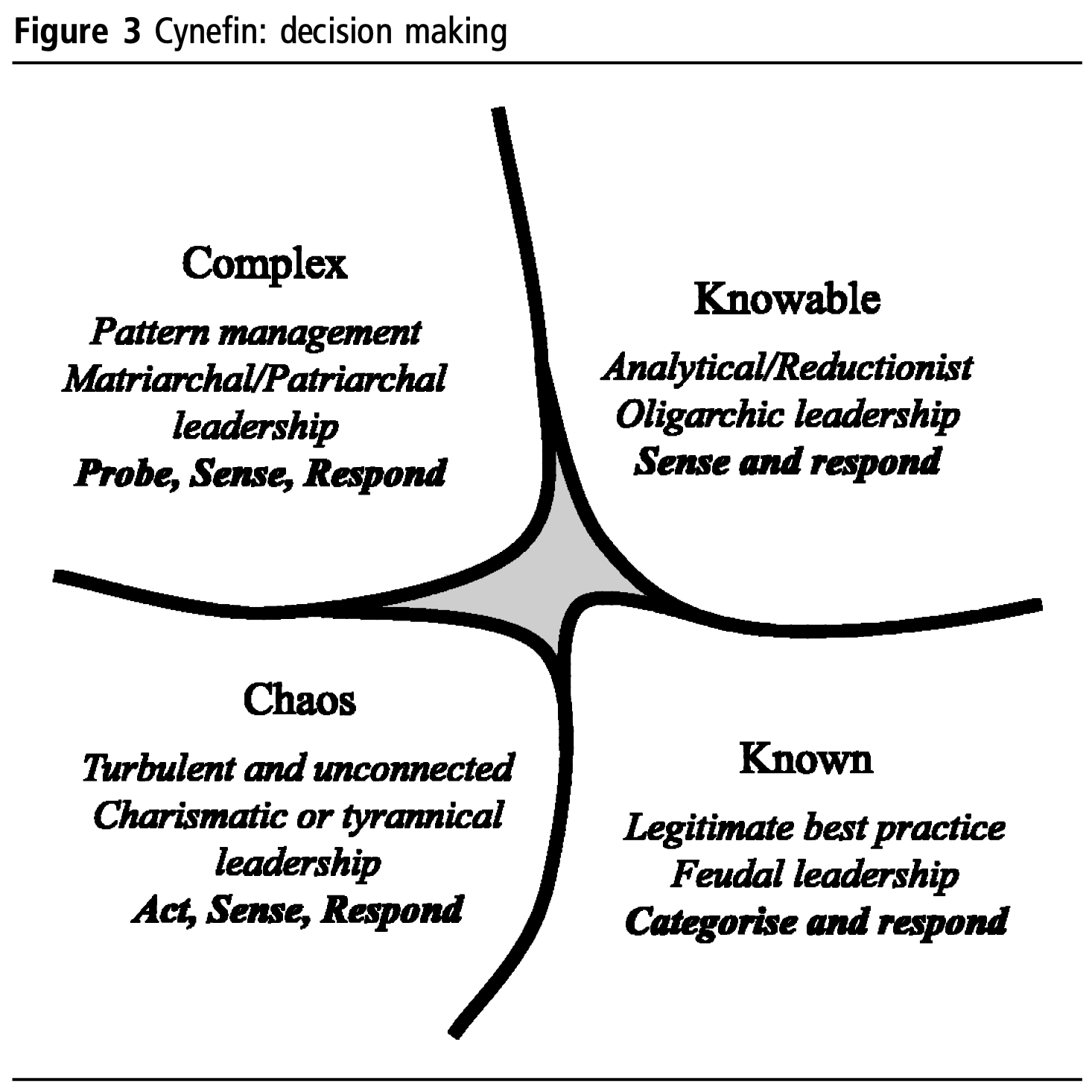 Here, for the first time, the terms complex and chaos appear in the Cynefin model, but again the disorder domain is not mentioned nor explained. The word disorder doesn’t appear at all in the article. Not even when – later on – in Figure 4 knowledge flows are introduced that even go through that mysterious unnamed 5th domain.

Another feature still absent are what later become known as the “seeing eyes“. These cute little drawings nicely illustrate the perspective of the decision maker for complex, chaotic, knowable and know aspects of situations. So its good that they are still part of the Confluence Sensemaking Model/Framework even though they gradually disappeared from the Cynefin model since 2007 which coincides with some corporate events and relationship changes within Cognitive Edge that go (far) beyond the scope of this blog.

Integrating all information available to me and balancing the views and perspectives espoused in the various discussions mentioned earlier it seems the following course Cynefin/Confluence model development might make some sense:

From this course of events I tried to construct a possible timeline of the development of the Cynefin model:

Please note I was not there at the time as I first encountered the Cynefin model in early 2004 while reading the IBM Systems Journal paper and my only purpose here is to provide some information that is not readily available from open sources. Ofcourse  the timeline – as stated – is my construction of what could have happened over time. At least the order of things are correct as all images come from published sources by and facts shared on the blogs of the original authors.

Information Nugget 4: Discovery of the resemblance between KiF and Cynefin

In 2012 I was cooperating with mr. drs. Auke van Breemen, one of the developers of the Knowledge in Formation (KiF) model. Besides the resemblance in sound when pronoucing the names of the two models we soon discovered the almost homological relation between KiF and Cynefin. KiF turned out to be very useful to design tripolars (also known as triads) and provided more guidance than Cynefin to discuss and hone StoryNaires (also known as Signifier Sets or Forms stories and Question about them). Together we applied KiF to the case of uncovering patterns of inclusion and exclusion of children in the Dutch primary education system.

The KiF models is heavily based on semiotics (the science of signs and signifiers) so I don’t recommend reading the above mentioned book without providing a warning that it may take of even spoil a few long summer holidays. Auke and I spent many afternoons crafting and drawing both models side by side and even in their most simplest manifestations its a bit hard to see the similarities: 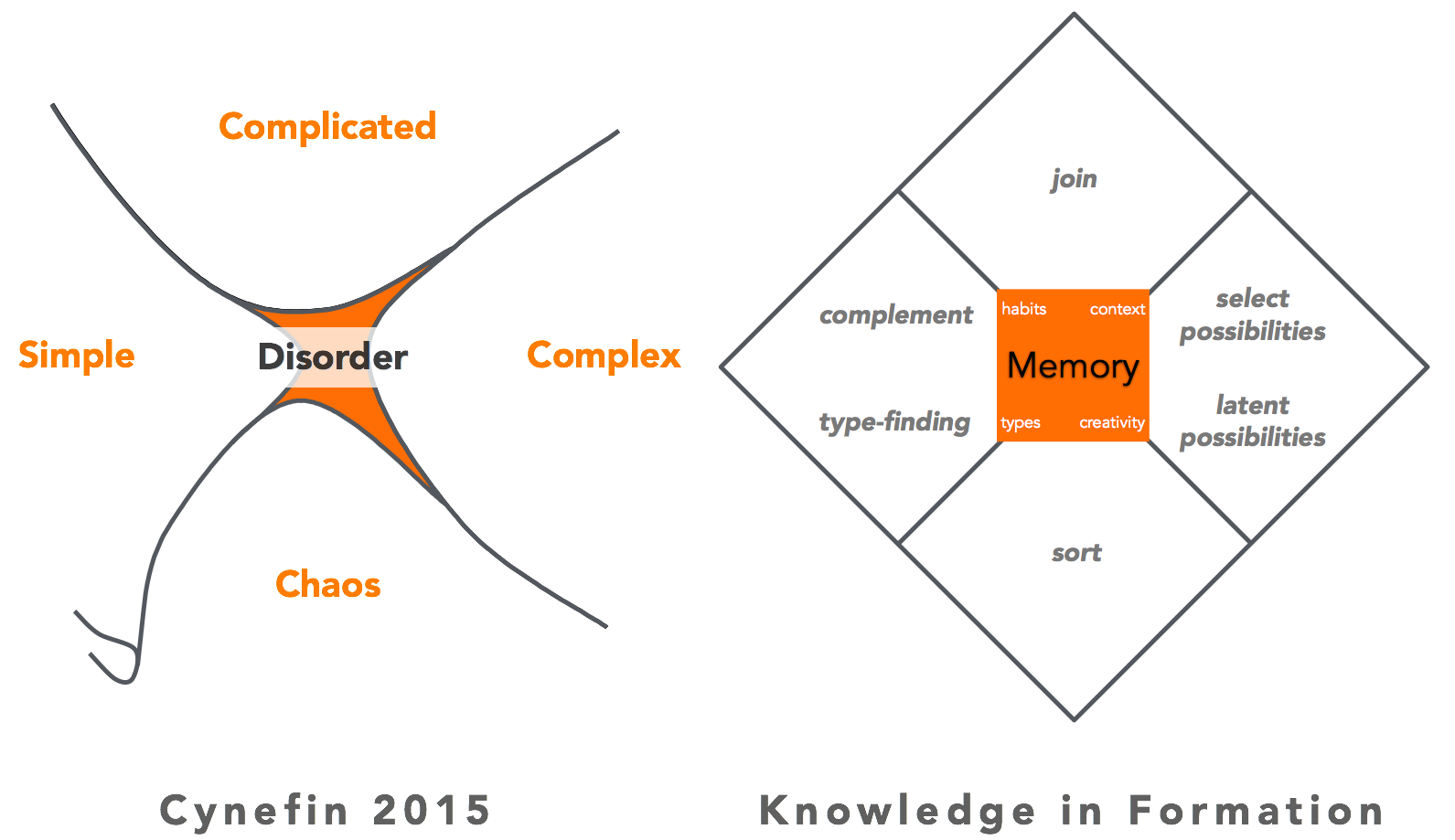 In this figure Cynefin has been rotated and mirrored in order to superimpose its domains with the equavalent ones in the KiF model. Hence chaos is pointing downward, and simple is on the left. Its also important to understand that KiF is a model of knowlegde formation in the brain (or an organisation or in software systems) and that information or events enter the model from the south. There it is first sorted, just like events in Cynefin are sorted for priority (what to do first in a crisis).

When recognized as known the type of event is matched with habits from memory, just like many people and organisation would do in known or simple situations (this is how we do things around here,  etc).

When there is no type available, creativity comes in (what can we do with). That is where innovation and discovery play a role and that is – as most readers will know – there complex aspects of situations come into play.

To illustrate this, suppose there is possible risk of starvation in a spaceship and suddenly someone discovers a living creature in a hidden room. Investigation shows its a horse. Some astronauts might treat that finding as a dangerous as the horse might damage the spaceship while others might become creative and see some good meals ahead, especially when the tail and ears are eaten first and next leg by leg is amputated (bringing in contextual constraints and balancing them with needs while overcoming barriers of inhumane treatment of animals in this extreme situation).

I wouldn’t opt voluntarily to be part of the discussion that must take place to join all opinions in into a decision by the astronauts. This again resembles sense-analyse-respond we find in the Cynefin model (the example of experts and professionals discuss and analyse complicated aspects systems and situations).

The homology between KiF and Cynefin – so I learned later – is also (partly) present with lots of other (historical) ideas and models. Cynthia calls them Siblings. The list occasionally still grows. KiF is also on the list, but I can’t find the URL tp its most recent update.

And now its up to you

By sharing these for nuggets of information I wish to provide more information to users of the Cynefin and Confluence models and to people that want to investigate their history (and hopefully improve the wikipedia page on Cynefin). If new information arises or those involved feel things are incorrect I’d love to stand corrected though opinion alone won’t impress me that much. Proof and facts is what this debate needs.

As far as I’m concerned today’s post lubricate the debate without heating up the fire. 50℃ in Utrecht next Saturday is dire enough. Lets hope no casualties will result from both the Grand Départ and during the discovery of new sources on the history of Cynefin.